“The Serbs are nice people. A rare sense of hospitality and trustful familiarity, which
adorns only those who know how to be excellent friends.”
Jean-Paul Belmondo, French actor

Serbia is located in the central part of the Balkan Peninsula and it represents animportant crossroad between Europe, Asia and Africa. Great connection to othercountries and the position the country has in Southeast Europe has enabled Serbiato be the linchpin of East and West.

Surface area: 88,361 km 2 .
The northern part of the country is occupied by a plain, while hills and mountains
can be found in central and southern parts.

Countries that border Serbia: In the East, Serbia borders Bulgaria, Romania in the
Northeast, Hungary in the North, Croatia and Bosnia and Herzegovina in the West,
Montenegro in the Southwest, and Albania and Macedonia in the South.

Population: 7,186,862 (excluding the Autonomous Province of Kosovo and Metohija)

Capital: Belgrade with the population of 1,659,440. Belgrade is located at the
confluence of two major rivers and it represents the “gate of Europe” to the Balkans.
It has been recorded that in its turbulent history it was a part of Roman, Byzantine,
Ottoman and Austro-Hungarian Empires.

Climate: moderately continental. Winters are short, cold and snowy, while summers
are warm. The coldest month is January, July being the warmest.

Official script: Cyrillic. Latin scrip is in use as well. 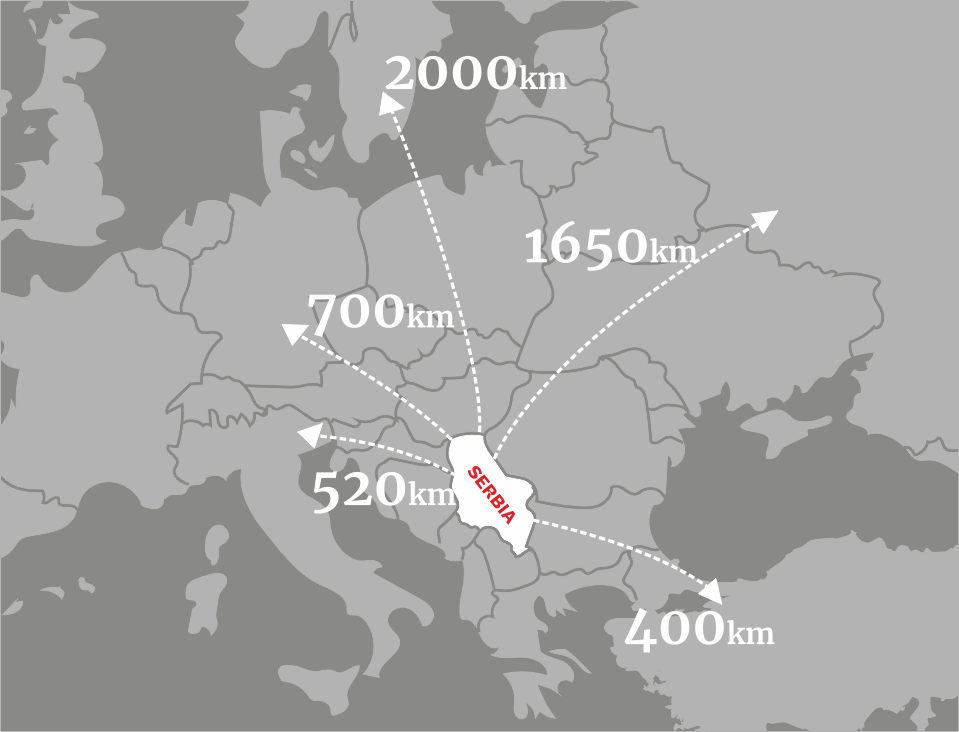 The Republic of Serbia is a sovereign democratic country of all citizens living in its territory. Apart from Serbs, there are also 37 ethnicities in Serbia. All citizens have the same rights and responsibilities, and they all have the right to national equality. Serbia is a Christian Orthodox country with rich history and here (in Lepenski Vir) can be found the traces of prehistoric culture dated 7,000 BCE, which is why this area is rightfully called the “Cradle of Europe”. Serbs are known as people, who will be happy to host you and offer delicious
traditional specialties. Most Serbs speak English and Russian, while a developed road network enables pleasant visits to many tourist attractions.

Good Internet coverage, low operating costs, skilled workforce and many other advantages make foreign companies and an increasing number of foreign nationals start their business in Serbia. According to the amount of new vacancies created in relation to SDI, Serbia, regardless of its population, has been at the top of the list for a few years in a row, as stated in a special report of fDi Intelligence, a Financial Times division.

According to an index created by a British enterprise Emerging Europe based on experts’ assessments, in 2021 Belgrade was declared the “city with the greatest economic potential”, while its “quality of life” puts it to the fourth place.

What banks can be considered?

As the main bank at the moment we are considering UniCredit, but you can open an account with a local company or a branch of a foreign company in most banks in Serbia. The client will be able to decide on the spot (there are more than 20).

Many large banking groups around the world recognize the potential of Serbia. Below is the list:

In what way should the newly created Serbian legal entity be kept?

1. We offer mini family office services for the convenience of the client, that will provide everything you need for your legal entity. However we offer all kinds of additional services, the cost of which depends on the wishes of the client.

2. Estimated costs of the company for 1 year:

• Irregular expenses – receipt of correspondence, selection of premises and other expenses, 600 euro / year

Is it possible to open a non-resident bank account of a legal entity, create a Serbian company or a branch of an existing legal entity (with a new, resident account) remotely?

Yes. We will prepare the English text of the Limited Power of Attorney of the lawyer. You must certify this document from any notary and send it back, with an apostille and other necessary documents.

In what way can we continue to use existing legal entity, at the same time using all the advantages of the Serbian system?

The process runs quickly. With limited power of attorney, this can be done within three days, without your presence. Bank account can be opened in less than 3-4 days. In total, it takes about seven days. Depending on the type of incoming payments, taxation may be close to 0%. Even if you need to pay corporate tax, it’s only 15%.

If you want to avoid a painstaking bureaucratic process, changing officials of an offshore company and do not want to wait a few months to open your non-resident bank account, this is perfect solution for you.

On what grounds can you get a residence permit in Serbia?

Our team is able to ensure the implementation of each of these methods.

What are the advantages of Serbia in the framework of international planning?

3. Residency in EU country in 5 years

4. Banking system without CRS in western European banks for branches in Serbia:

What are the financial Benefits and Incentives?

What is the Company Taxation System?

2. Personal taxes based on yearly worldwide income. (Data for 2015)