For our team building trip we chose something special. We made plans for days, and finally we left Belgrade and hit the road. After 200 km drive, we were supposed to arrive in Central Serbia, in the canyon of the river Zapadna Morava, famously beautiful part of Serbia.

Instead, couple of hours later, we found ourselves stuck in traffic jam and we hardly left Belgrade area.

Fortunately for us, in Serbia, natural beauty is always just around the corner, so we simply changed course and headed west, in the direction of nearby city of Valjevo, heart of Western Serbia and my home city.

Only 90 km from Serbia’s capital Belgrade, Valjevo is situated on the banks of four rivers, one of which is Gradac river, one of the cleanest rivers in Europe.

City of Valjevo has a long and rich history and the first mention of its name date back to the year 1393.

History of the city is visible from the first step, since it has two historic and preserved pedestrian zones, one, called Tesnjar, in the Oriental style, with small workshops and taverns, and the other in 19tH century European style.

After short rest and visit to the museum, we left Valjevo and headed to Ćelije Monastery. Dedicated to Saint Archangels Michael and Gabriel, Monastery was founded in 13th century and reconstructed in 18th century.

We were fortunate enough to meet one of them, and wise and kind words that she shared with us echoed loudly in our minds long after we left valley where this holly and quiet place is almost hidden from the world. 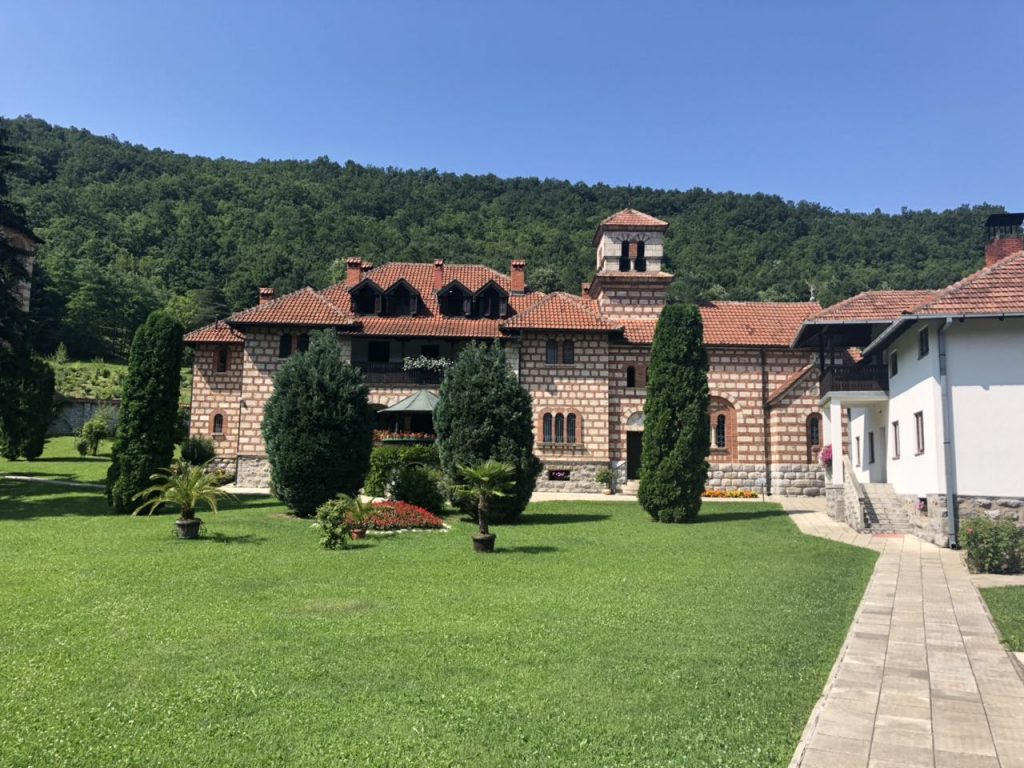 Monastery Lelić, that we visited next, truly left us all in awe.

Different in architectural style from the Ćelije Monastery, but still very similar in a sense that from the moment we passed the ornate gates, we found ourselves shrouded in peace. After hot and busy streets of Belgrade, this place seemed almost surreal.

Old Lelić church become Monastery in 1996, 40 years after the death of its benefactor bishop Nikolaj, and 5 years after his remains were transported back from America, where he spent part of his life.

In the monastery there is a museum devoted to Nikolaj Velimirovic, and in there is an active workshop with iconographers and engravers.

The painting of Monastery walls were made according to the ideas of Nikolai Velimirovic, and the central scene is the scene of the Judgement Day. 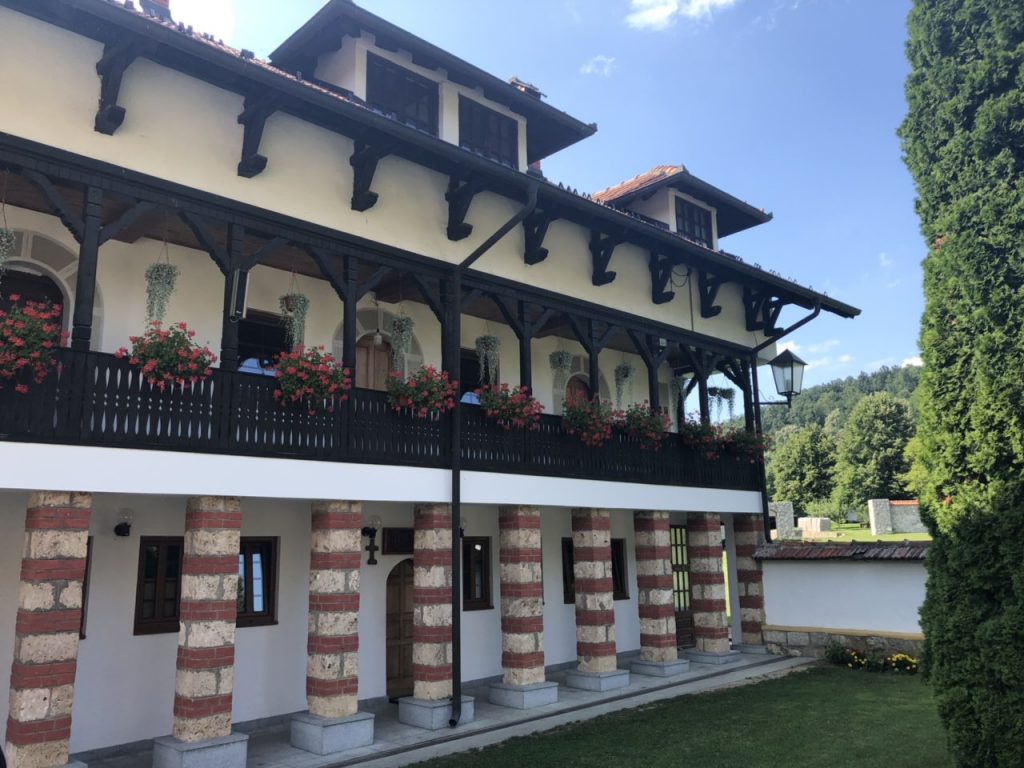 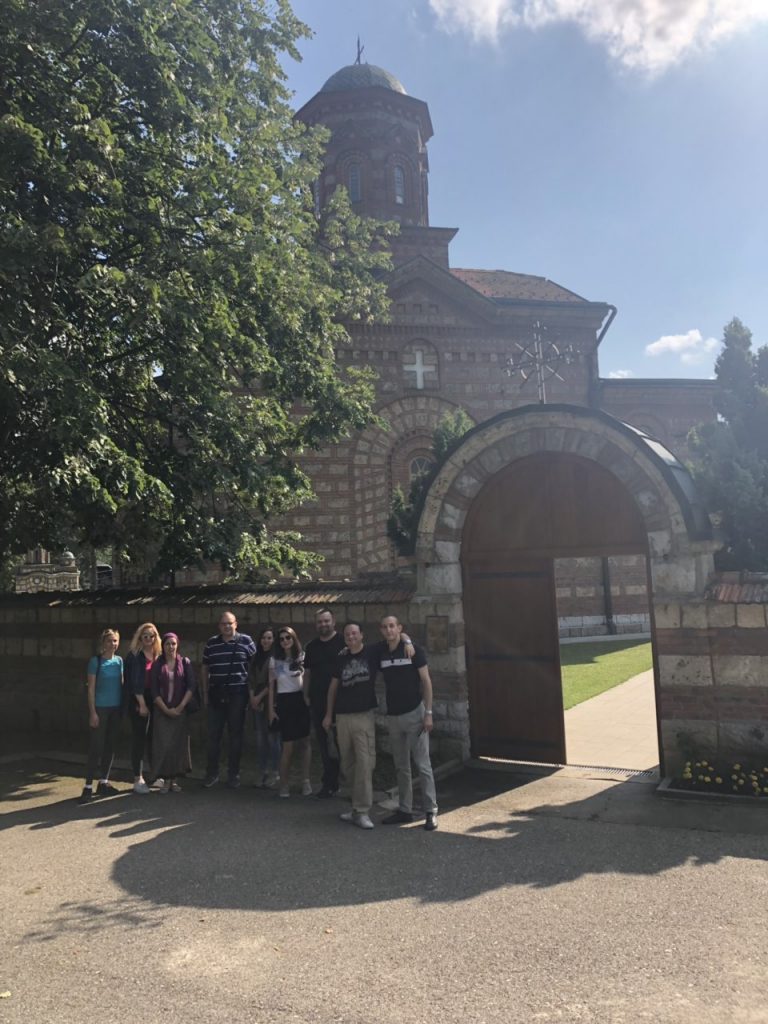 Bishop Nikolaj claimed that his native village, Lelić, was “the village of God” and on the tombstone of Nikolaj’s father, Dragomir, it was written that he was born in “the God’s village of Lelić”.

And whomever visits this sacred place even once, will most definitely agree with that statement. Our little group where no exception.

Final stop before heading back was Brankovina, small but in Serbia very famous village, situated 11 km north of Valjevo.

Brankovina is unique in its beauty and cultural and historic importance for Serbian people, and also very dear to me personally, as it is place where I grew up. 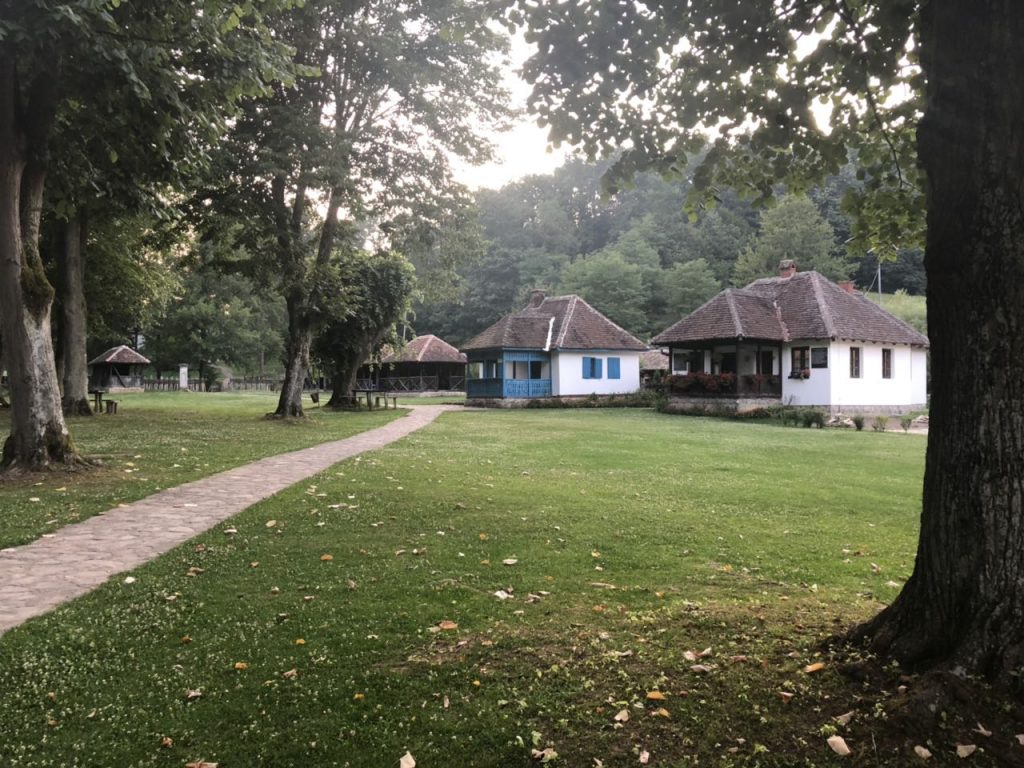 In the center of the village there is a memorial and museum complex dedicated to the famous Nenadović family, library and old memorial school dedicated to one of the greatest Serbian poets Desanka Maksimović as well as Orthodox church dedicated to Holy Archangels.

We arrived very late, so all museum buildings were closed for the day, but we had a fortune to meet local priest Father Dusan, whose long and detailed story about history of the place took us back in time.

It was of no importance that we didn’t get to see all the artefacts. Standing in that quiet place, in sunset, surrounded by ancient trees, even older gravestones and listening to the story of an old and kind priest, we where transported back, more than 200 years in the past. In the times when Serbia, led by Prota Mateja Nenadovic, his brothers Aleksa and Jakov Nenadovic and many others fought a war for freedom and independence of Serbia, after 500 years of being ruled by powerful Ottoman Empire.

Nenadovic family members were leaders of that uprising and in later years shaped the history of Serbian people.

That is the reason, Father Dusan said, he likes to greet people who come here, and tell them stories. Stories he heard from others, that lived here before him.

History of this place is far too important to ever be forgotten and should be shared with others and preserved in memory of Serbian people.

And we couldn’t agree more.

We left for Belgrade with the felling that this day was very well spent and with a promise to come back very soon. After all, we have yet to see and discover so much more of what Western Serbia has to offer.

Protect your funds and use them freely – How to park your business in 5 easy steps!